Earlier this summer I finished a small table. The top, which I like a lot, was more luck than skill. All I had to do was not mess up the wood. Making a tabletop with pieces from the same board makes things easier. For one, the color is going to match. With straight(ish) grain it’s easier to get a nice pattern, too.

The only downside to this ribbon figure is that the stripes run in opposite directions. Controlling tear out took some work. Eventually a 12 degree back bevel and hand scraper did the trick nicely. And cross-grain planing only.

I hit up the lumberyard again recently looking for similar straight grained boards for a coffee table.

I failed to keep the simple objective of “straight grain” in my head as I moved board after board in the heat. Which is how I ended up with several striking boards that definitely do not have straight grain and are proving to be a real bear to piece together in a way that does cause a neural fit on looking at them together.

After laying them side by side and dealing with cruel reality that they do not match color-wise, grain-wise, or good sense-wise I ditched the idea.

However, I couldn’t let go of the idea of using the two nearly bookmatched boards as the center of the table

I then played with every conceivable matching permutation  with the other boards I have. Well over an hour of laying boards out and snapping pics so that I could go and look at them again. And again.

Finally, I settled on the combination below. It was the one that, strange as it may sound, made me feel at ease. That may just be the sense that I won’t hate it once it’s glued up.

As I am working on a project that requires dovetails, I have spent most of my time in the shop this week shaking the rust out. It is entirely possible that I have reached a cabin-fever pitch of practice.

Those are the practice joints and the many practice cuts I made warming up and trying to work out what I was doing wrong. Not that I keep these around, but they were all lying on top of my shaving pile that I only sweep up when it’s waist deep.

Surprisingly, I have not mastered dovetails this week. At least not to the level I want. But I have identified places where I need work or work-arounds.

I am in the midst of milling the pieces for a coffee table. In order to stave off insanity as I flatten, cut, and plane to size some 30 bf of 6/4 stock I have been making some shop tools so I feel like I’ve accomplished more than making a shit-ton of shavings.

I made a try square and straight edge as much for the practice as need for the tools. I’ve hit a point where I would like to make what I can. Because I am cheap. I actually made both tools twice. I was way eager with my first straight edge and milled the board the same day as I shaped it. So, it bowed causing a belly. I used cedar this time around, which is a lot lighter than the jequitiba I used for the first go round. I also ditched the handle and shaped the middle to fit my grip.

I didnt like the first try square I made – the proportions were off and the cedar blade didnt feel right. I made the second with a cherry blade, which I like a lot better. 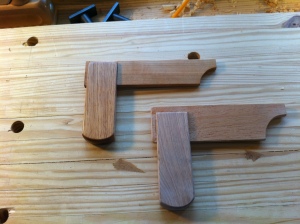 Given that I make a lot of things twice I think it’s time to start using cheaper wood to purposely make “prototypes”. This would mean facing the reality that I rarely get it right the first time.