I am in the midst of milling the pieces for a coffee table. In order to stave off insanity as I flatten, cut, and plane to size some 30 bf of 6/4 stock I have been making some shop tools so I feel like I’ve accomplished more than making a shit-ton of shavings.

I made a try square and straight edge as much for the practice as need for the tools. I’ve hit a point where I would like to make what I can. Because I am cheap. I actually made both tools twice. I was way eager with my first straight edge and milled the board the same day as I shaped it. So, it bowed causing a belly. I used cedar this time around, which is a lot lighter than the jequitiba I used for the first go round. I also ditched the handle and shaped the middle to fit my grip. 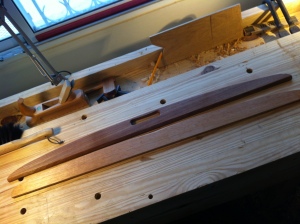 I didnt like the first try square I made – the proportions were off and the cedar blade didnt feel right. I made the second with a cherry blade, which I like a lot better.

Given that I make a lot of things twice I think it’s time to start using cheaper wood to purposely make “prototypes”. This would mean facing the reality that I rarely get it right the first time.