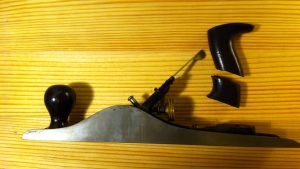 That was the tote for me #5 Stanley. If it had just been one break, I’d have glued it backed together and muddled through. But this was a combo of an old break giving way and a new break. Seemed a lost cause.

So, with much trepidation I carved myself a new tote. Sure, I could have bought one, but that doesn’t seem right. Lee Valley has a good template and directions here.

I was worried most about getting boring a straight hole for the handle rod. But I was successful.

After a few tries.

Shaping the tote was more fun than I thought it would be, and something that I’d been meaning to do more of. There’s the silver lining on breaking the tote in the first place. It was the first time I’d really used rasps for a lot of the work, and I now love rasps.

To get the rough shape I used stop-cuts and a chisel. It’s way more effective and much safer for the work piece than my coping saw skills. I then refined with rasps: a 4-in-1 with 6 and 9 grain and a cabinet rasp with 9 grain. The half round on the 4-in-1 was particularly useful in the tighter radii.

Next, I used a spokeshave and rasps to make a 1/4″ chamfer on the thicker parts and a 1/8″ on the thinner bits. Those were then rounded over using the rasps. 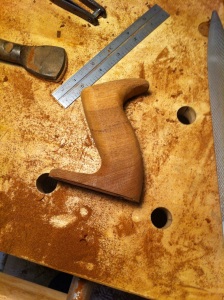 If it looks chunky, it is. Side-to-side width is around 1 1/4″, which is considerably more than what I had before. Only after boring the handle rod hole did it dawn on me that I’d either committed to the thickness as I had it, or to very, very carefully removing waste from each side so that the hole stayed centred.

So I left it thick. Which I actually like. It feels better in my hand, maybe even a bit softer, if that makes sense. Or I just like the feeling of rationalisation.

And it fits! Of course I did a few trial fits throughout the process. There’s a little hiccup in the handle rod not getting 100% tight. There are several variables that might be causing that. Counterbore may not be deep enough or too deep. Tote height too short. But I also noticed that the rod does not want to screw all the way in, and somewhere along the line the rod developed a curve. 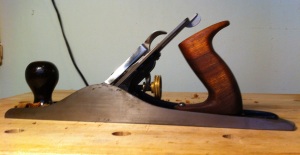 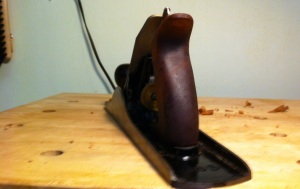