The seat of my camp stool has been done for some time and needing legs. Three legs. As such, I spent an inordinate amount of time making three different legs because I wanted to see what I could do without a lathe. This was something of a blank space in the internet. No clear directions on how to hand carve curves that taper in and out. Or end abruptly in the middle of the piece.

Three legs – tapered and rounded sapele in the middle; rounded and tapered down then back out on the right in oak; and a rounded leg tapering to the flat top of a rounded foot in pine.

I didn’t bother keeping track of how I went about the rounded taper. I forgot with the taper in-and-out in oak.

So, on with the pine leg that tapers down to a flat topped foot.

The process was draw lines, taper, draw more lines (as shown in this post on cabriole legs), chamfer and then round. I used a combination of chisel, plane, and rasps.

Initially  I’d set out some guide lines using a method for drawing an octagon from Chris Schwarz as seen here. Also, finding the centre at both the top and bottom and using a compass to draw circles provides other reference points. 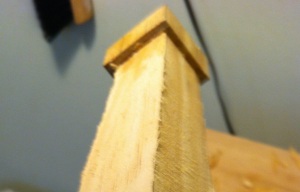 The foot was a completely experimental. It rounds horizontally and vertically. Basically whittling a ball. Finally I sawed the bottom off to flatten it and arrived roughly at the point I had intended. 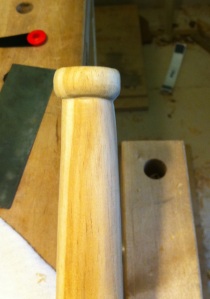