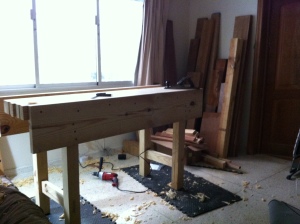 It’s possible that as much time went into deciding what kind of bench to build as did building it. Eventually, Paul Seller’s plan from his “Working Wood” won out. I had the book and DVDs already, but more importantly it’s a straight forward design that looked sturdy and workable. A workbench, not a lifetime experience, was what I was after.

Not perfect, not a looker. Now that it’s done I have a real tool for  other projects.

I probably would have done some things differently in building this, like not fuck up the mortises so violently. There are a few tweaks I may make down the line. This will probably be a Frankenstein’s monster bench – a way for me to play around with ideas without worrying that I am screwing it up. That we’ll be moving in a year and I might have to leave it behind plays a part in that, removing whatever remaining concerns about making it pretty and perfect.